The national attention garnered by the #MeToo movement starting in 2017 has sparked something of a revolution. Since then, women and allies across the country are bringing much-deserved awareness to the undercurrent of sexism, harassment, and discrimination in our culture as a whole. And in Seattle, there is a group that is turning that awareness into action to bring change to their workplace.

The Seattle Silence Breakers (SSB)formed in November 2017 after an article that was published in The Stranger exposed a long-standing pattern of sexual harassment being pushed under the rug at Seattle City Light.

In the comments section, someone posted a link to an event sponsored by the activist organization Radical Women called “The Power of #MeToo.”

Rocha revealed herself as one of the anonymous women in the Stranger article.

“When Beth told her story, I was ticked-embarassed-disgusted-sad, all at the same time, that the place where I work could treat anyone this way,” said PROTEC17 member Denise Krownbell.

After sharing their stories with each other, these women noticed the similarities in the way they were treated when they brought discrimination and harassment issues to management and human resources – and they decided to do something about it.

“It was that night we decided to form the group that became Seattle Silence Breakers,” said Krownbell.

They spread the word, and got more than 30 people to attend their first meeting, representing departments throughout the City, including Construction and Inspection, Information Technology, Public Utilities, and Transporation.

Since that initial meeting, the SSB have mobilized, staging actions and events, and making headway with City leaders to demand change.

The goal of the group – now led by Krownbell and Radical Women’s Gina Petry – is to be a voice for employees who are experiencing any type of harassment and discrimination, but who aren’t ready to completely break their silence and risk their livelihoods. The SSB also want to ensure that the City makes it a priority to end policies that reinforce this culture of fear and retaliation.

“For me, seeing and hearing the impact that discrimination, harassment, and bullying have on employees makes me speak out and take action,” said Krownbell on why she decided to take a leadership role in the SSB.

“It was why I wanted to become a union steward, too. No one should be treated this way – not in “liberal” Seattle or anywhere; not on the public’s dime and not in their name. No one should dread – let alone fear – coming to work because of what they will be subjected to. They shouldn’t get physically ill, and they shouldn’t doubt themselves or think they are crazy. That is why I speak up.”

Because of their bold courage, the SSB have gained the respect and support of several City Council members, including Teresa Mosqueda, Kshama Sawant, and Lisa Herbold. Mayor Jenny Durkan and the new City Light CEO Debra Smith are also listening to the SSB, and some progress has been made. 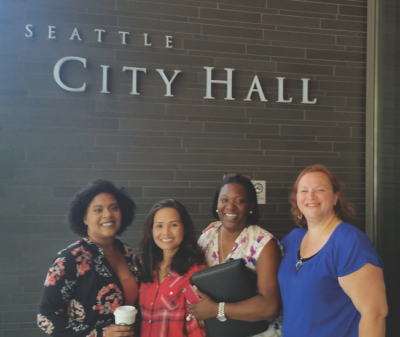 Over the last year, the City has implemented improved policies for sexual harassment settlements and formed an anti-harassment team, as well as developed an Ombudsman program – an independent resource and advocate for employees – a direct result of an SSB proposal.

“The work we have accomplished has come through inclusion, and that inclusion has been prompted by our very visible advocacy: whether it be showing up on the steps of City Hall with signs and a megaphone or with pages of signed petitions to deliver to Mayor Durkan,” said Rocha.

Currently, the SSB are working on several different issues. They are forging new relationships with the head of Seattle Public Utlities to discuss issues specific to that department; they are urging the Mayor to create an independent office that pursues discrimination and harassment complaints; and they also have an active petition on Change.org to recind a City Light investigation report that they perceive as biased.

For Kathleen Merrigan, a retired City Light cable splicer who attended that first Radical Women event, the SSB are tackling issues that are very personal to her. As one of the few female workers on the line crew at City Light when she started in the 1980s, she endured many years of mistreatment.

“I am appalled and outraged that city workers are still dealing with these issues,” said Merrigan.

“The Seattle Silence Breakers and other employee groups are doing good work,” said continued. “That is what it is going to take, along with public support.”

PROTEC17 has been supporting the important work of the Silence Breakers, too. Amy Bowles, former PROTEC17 Union Representative for members at the City, served on the Mayor’s anti-harassment team, and has been a vocal advocate at City Council and in the news media.

“Amy was side by side with us at Council Committee meetings, vocally supportive of our efforts and rightfully critical about the City Light’s lack of involvement with the union on issues regarding workplace expectations, as well as employee-voiced concerns about relevant employee and management training and consistent responses to discrimination and harassment,” said Rocha.

The SSB would like to see PROTEC17 continue to develop relationships with City Council, and to push for a seat at committee meetings where important policy decisions are being made. They also would like their story to be spread far and wide so that their fellow union members and workers in other juridictions who may be experiencing these same issues will have hope.

For many at the City of Seattle and beyond, the work of the SSB has been inspiring.

“I truly appreciate the SSB’s fearless willingness to stand and speak up for those of us employees who have been or still are, victims of harassment in the many forms it is presented, and being bullied in our careers while working for the City of Seattle,” said anonymous.

PROTEC17 member Gina Kim, who works for Seattle Public Utilities joined the SSB “because of who they are and what they stand for”.

“They are fearless,” she continued. “They are not afraid to speak out and do the right thing. They are united in one voice and they act quickly to face discrimination and harassment, especially against women. They give hope to those that have suffered and they are determined to see that the City is held accountable for making changes.”

Though there is still a long way to go, the members of the SSB have blazed a trail for change by taking a stand and using their collective voice. If you feel you are experiencing discrimination or harassment in the workplace, please reach out to your Union Representative.

FacebookTwitterRedditLinkedInEmail
Previous
BACK TO ALL ARTICLES
Next
Deidre Girard2019-02-20T15:53:18-08:00
Go to Top