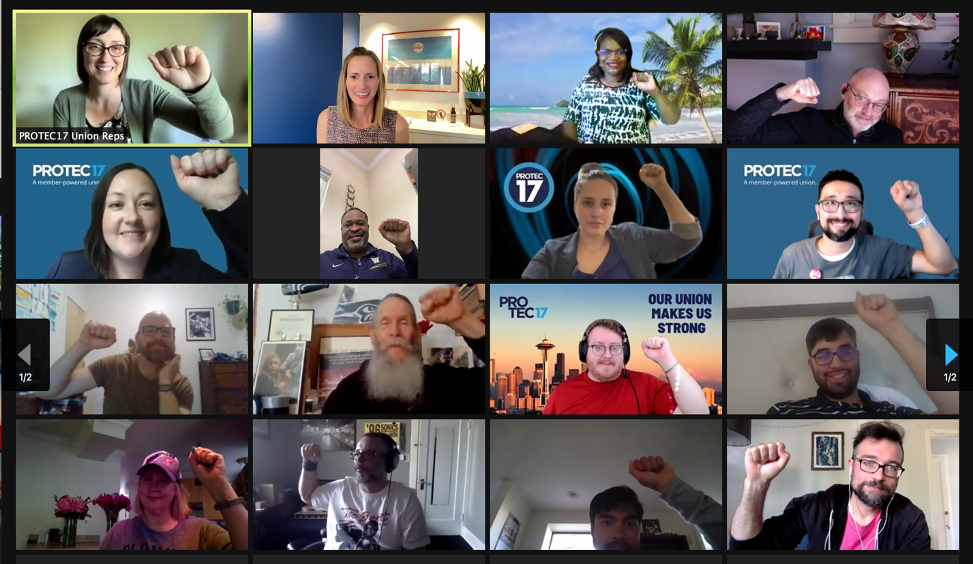 Whether we like it or not, politics plays a huge role in our lives. And especially as public employees, lawmakers at every level make decisions that impact whether our jobs will be funded, our retirement plans will remain solvent, or whether we can take time off to care for a sick loved one.

PROTEC17 members advocate for laws and policies at the city, county and state level that support our members and their families. In addition, we have a political action committee (PAC) that makes endorsements for worker-friendly candidates. The PAC is funded through voluntary donations — NEVER DUES MONEY.

As races across the country count their final ballots, PROTEC17 is encouraged by the strong performance of our endorsed candidates throughout the state of Washington. We are proud to support candidates who have shown a clear commitment to strengthening the labor movement and improving the lives of working families. Be on the lookout for a more detailed report on our wins and opportunities to be shared in early December. 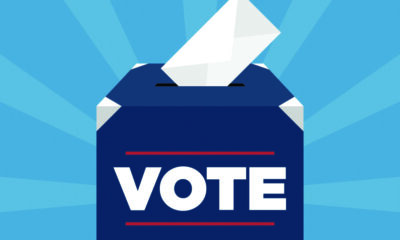 We are excited to share our official endorsements for the 2022 Washington State election–coming up on Tues., Nov. 8! Our amazing member-led Political Action Committee (PAC) took the time to carefully interview dozens of candidates for these endorsement selections. The endorsements are a reflection of PROTEC17 political candidates who have our support due to their commitment to supporting working people and their families.

Interested in participating in the Political Action Committee (PAC)? It’s not too late! Reach out to our Political Director, Brandon Hersey.

In Summer/Fall 2022, PROTEC17 members interviewed candidates for Portland City Council. The committee, made up of 11 PROTEC17 Portland chapter members and two union staff members, conducted interviews in the Spring prior to the primary election. Due to ongoing contract negotiations between the City and PROTEC17 at the time, the committee decided not to issue endorsements for any City Council races in the primary, instead opting to revisit races in the Fall general election.

We are pleased to announce our official endorsement for Commissioner Jo Ann Hardesty for Portland City Council.

Since her election in 2018, Commissioner Hardesty has shown leadership on issues that impact PROTEC17 members, such as helping to create Portland Street Response, which aims to provide a de-escalating approach to first response calls to Portland’s most vulnerable communities. Additionally, as the commissioner-in-charge of Portland Bureau of Transportation (PBOT), Commissioner Hardesty has overseen traffic calming steps in Mt. Scott/Arleta that has had dramatic, positive impacts on crime in the neighborhood. She advocated for the expansion of street plazas and sidewalk businesses that allowed neighborhoods to flourish during difficult stages of the pandemic and into the present.

If you are interested in getting more information about the Portland and/or Oregon State candidate endorsement process, please email PROTEC17 Research Director and Oregon Legislative Advocate Elliot Levin.

We are gearing up for the 2022 election season!  Last year, our member-lead Political Action Committee (PAC) interviewing and endorsed dozens of candidates. This unique opportunity allowed PROTEC17 members to share the work we do with political candidates, as well as showed our support to those who are committed to supporting working people and their families. If you are interested in participating on the Political Action Committee (PAC) this summer, please reach out to our Political Director, Brandon Hersey.

PROTEC17 is excited to begin our 2022 candidate endorsement process. If you are a political candidate seeking an endorsement from PROTEC17, please follow the link below to access our candidate questionnaire.

Upon completion of the questionnaire, you will be prompted to schedule an endorsement interview with PROTEC17 members and staff. If you are not available on any of the provide dates, please contact our Political Director Brandon Hersey at for assistance. Thank you, we look forward to connecting with you soon. 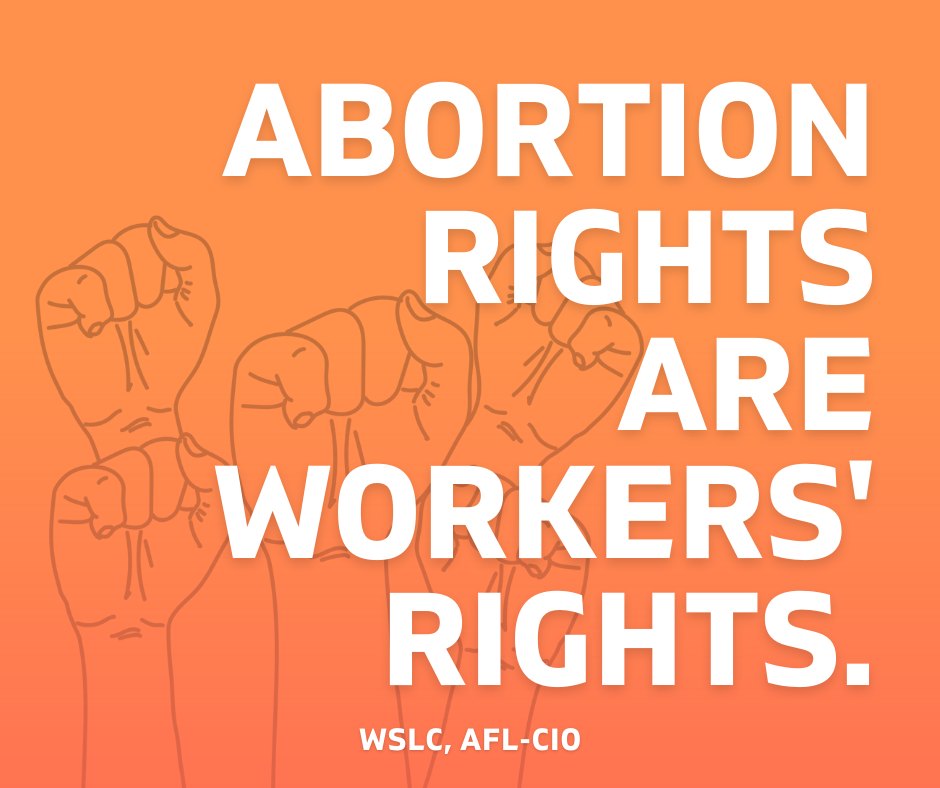 PROTEC17 stands with the millions of women, girls, transgender and gender-non-conforming people, and all working people for reproductive healthcare, justice, and rights. 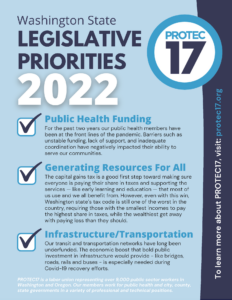 Click the link below to find a summary of the legislation that was passed during the 2022 Washington State legislative session that aligned with PROTEC17’s priorities — click on the graphic on the left for more details.

Because the legislature is meeting virtually in 2021 due to the pandemic, it’s easier than ever to share how policy and funding bills will directly impact your work as a public employee. Follow the steps below to submit public comment or testimony.

How to submit testimony on a bill:

How does the Committee/Bill process work?

In spring 2022, PROTEC17 members interviewed candidates for Portland City Council and Auditor. These interviews were conducted in two rounds — one, as part of the Unions United table which consists of other public employee unions, and the other as a separate panel of PROTEC17 members. After both rounds of interviews, the PROTEC17 interview panel has decided not to issue a formal endorsement in either of the Commissioner races for Seats 2 and 3 (currently occupied by incumbents Jo Ann Hardesty and Dan Ryan).

For Portland City Auditor, the PROTEC17 panel has chosen to endorse Simone Rede.

“Simone showed an impressive knowledge of issues and vision for the office of Auditor that aligns with PROTEC17’s core values, and her experience and background gives us confidence that she will be an excellent choice,” said Ian Hackett, Portland Chapter Treasurer and GIS Technician III with the Bureau of Environmental Services, who sat on the interview panel.

Don’t forget to vote! Ballots for the Oregon 2022 primary election must be returned by Tues., May 17.

If you are interested in getting more information about the Oregon candidate endorsement process, please email PROTEC17 Research Director and Oregon Legislative Advocate Elliot Levin.

February 1 marked the beginning of the 2022 Oregon Legislative session, which is a short even-year session lasting until March 7. Broad priorities of the legislature this year include the State budget, pandemic response issues, housing services, and education funding. The session also welcomes a new Speaker of the House, Corvallis Representative Dan Rayfield. Representative Rayfield has been an ally to labor through his tenure in the legislature, and PROTEC17 members in Oregon have high hopes for his leadership.

Below are a few of the labor-related bills and issues that we were tracking this session in Oregon:

While Federal infrastructure funding disbursements are currently being discussed in the Oregon Transportation Commission rather than the legislature, PROTEC17 will be monitoring legislative conversations on the subject in order to assure that appropriate funding reaches local transportation agencies including the Portland Bureau of Transportation (PBOT), and that State projects within the Portland metro area adequately compensate PBOT to mitigate impacts.

If you are interested in getting more information about these or any other Oregon legislative subjects, please email PROTEC17 Research Director and Oregon Legislative Advocate Elliot Levin.