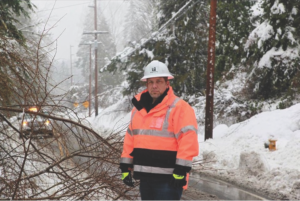 The snowstorms in Western Washington this February were absolutely unprecedented. For nearly two weeks, the Puget Sound region was slammed with storm after storm, breaking temperature and accumulation records.

In the typically mild Seattle-metro region, PROTEC17 members in the King County Roads Services Division worked around-the-clock to keep people safe in the snow and ice.

“The Roads Services Division has a robust plan for snow and ice that is thoroughly reviewed in the fall of each year,” said PROTEC17 member Brandy Rettig, who has been with King County for 19 years.

As a Customer Service Administrator, Rettig develops communications for the division and is responsible for providing accurate and timely information to the public. And with over 1,500 miles of roadway and 182 bridges in the County, there is a lot of ground to cover.

During the two weeks of stormy weather, the helpline received over 7,000 calls – which is astounding when compared to the usual 1,500 calls per month. Callers were reporting power outages, downed trees, and impassable roads.

Then there were the plow drivers and utility workers who worked long hours – in 12-hour shifts for nearly two weeks straight. Also, PROTEC17 Engineers, like Dieu Quach and Jun Wang and, Maintenance Managers, like Jeremy Ferguson, spent their days assessing storm damage and prioritizing workflows.

“Nearly every single employee of the Roads Division had to switch focus in order to respond as successfully as we did to this event,” said Rettig.

The response was coordinated across King County divisions and other agencies too. For example, King County Parks and Solid Waste diverted their trucks and other equipment to haul salt and necessary supplies. There was also coordination among King County emergency operations and Metro, as well as external agencies like the National Guard, city governments, and neighboring counties.

Rettig, who has also been a PROTEC17 Steward for 17 of her 19 years at the County, is proud of her public service work and the good work her colleagues do everyday for their community.

“In addition to the truly outstanding people I have the honor to work with here at King County, serving the public through local government service fulfills my personal need to contribute to the community in tangible, meaningful and truly beneficial ways,” she said.

Whatever the weather, PROTEC17 members at King County – and all of our members in our other units – go above and beyond to serve the public. Thanks to all of you for keeping us safe during the stormy weather, as well as throughout the year!

FacebookTwitterRedditLinkedInEmail
Previous
BACK TO ALL ARTICLES
Next
Deidre Girard2019-04-16T09:30:50-07:00
Go to Top