Life After Work: Engineering by day, roller derby by night 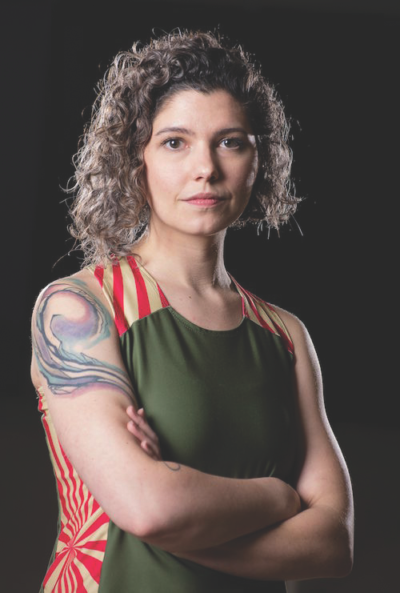 Transportation Engineer Kaitlynn Pecha spends her days making sure that transportation projects at the Washington State Department of Transportation (WSDOT) meet design guidelines. But after work, Pecha becomes a force to be reckoned with on roller skates as part of the Rat City Roller Derby (RCRD) league.

Pecha started at WSDOT in 2013 as a temporary Technician in the Everett Construction office and is now a permanent Transportation Engineer III for the Northwest Region. In addition to reviewing design guidelines, she also ensures that the documentation that WSDOT retains in its archives are accurate and consistent.

In roller derby, Pecha goes by the name of ‘Shear Force’ – #37 on the Derby Liberation Front team. She was inspired to join after seeing her first RCRD match a few years ago.

“I went to see a bout [a derby match] with my in-laws and was entranced,” she said. “It looked like a ton of fun, so I jumped in!”

While she had done inline skating as a kid, she had never considered roller derby until that first match. Pecha started in the Pinkies, the beginner skater program for RCRD, in September of 2017 and by last October, she was drafted to a team.
Roller derby is a contact sport that traces its origins back to roller-skating marathons in the 1930s. In its heyday in the 1940s, roller derby was watched by millions of spectators all across the United States. Over the years, the sport became more theatrical, with scripted bouts, but it mostly faded in popularity until a resurgence in the early 2000s.

The game is played on a elliptical track with two teams of five members each skating counter clockwise. The goal is to help your jammer (a skater who scores points) to lap skaters on the opposing team. All other skaters on the team play both offense and defense to help their jammer get past the other team, and hinder the opposing team’s jammer from passing.

Pecha enjoys this physicality of gameplay as well as the teamwork and camaraderie that comes with derby.

“My favorite part of roller derby is the fast-paced decision-making and communication between teammates on the track,” she said.

Today, roller derby retains some of the theatrics of its former days — like having fun pseudonyms for players — but is recognized as requiring skilled athleticism.

While most teams are all-female, there are an increasing number of male and co-ed leagues. In 2018, the Women’s Flat Track Derby Association had more than 400 member leagues. Roller derby is under consideration for an Olympic sport in 2020.

The RCRD is now in its 15th season. “Rat City” is a nickname for White Center, where their first practice location – the Southgate Roller Rink – is located. Formerly called the Rat City “Rollergirls,” they recently rebranded to be more inclusive and empowering.

Pecha is grateful that she has a rewarding job that also allows her the time to do the things she enjoys outside of work.

“Being in a union helps me have better work-life balance,” said Pecha. “It would be immensely harder to fit all of the practices, workouts, and league work required for roller derby into my schedule otherwise.”

In addition to derby, Pecha also enjoys reading, crafts, and spending time with friends, family, and her pets.

You can catch Pecha skating in the next RCRD bouts on March 16 and 17. To learn more about roller derby and the Season 15 schedule visit: ratcityrollergirls.com.

FacebookTwitterRedditLinkedInEmail
Previous
BACK TO ALL ARTICLES
Next
Deidre Girard2019-02-20T15:11:28-08:00
Go to Top