On Oct. 21, the PROTEC17 Regional Executive Committee (REC), our union’s policy making body, convened via Zoom for their twice-yearly meeting, which included planning for 2022 and the annual member leadership awards.

The meeting opened with a welcome and tribal land acknowledgement by PROTEC17 President Rachael Brooks and then delegates were able to introduce themselves to each other in small virtual breakout rooms. After returning to the session, new delegates were sworn in, as well as Executive Board members Jessica Garcia and Emily Tabachnick whose elections were uncontested and will therefore serve another three-year term. The REC then motioned to approve the minutes from the February meeting.

Delegates heard a ‘state-of-the-union’ update from Executive Director Karen Estevenin, and a budget review from Board member Garcia.

Director Estevenin also introduced the PROTEC17 Vision Committee, who has been working on a vision statement for our organization for several months after collecting input from the REC and broader membership last year. The vision statement – unanimously adopted by the delegate body – reads: “Together as PROTEC17, we envision a world free of social, racial, and econmic injustice, where all people thrive, living happy, healthy, and fulfilling lives.”

At this meeting, the Constitution Committee also presented two new amendments to PROTEC17’s governing document, which were approved by the REC to go to the full membership for a vote. 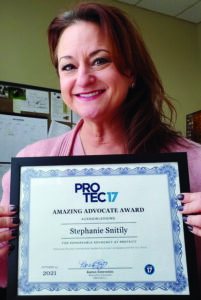 Director Estevenin then led the REC in an exercise to help our union prioritize and plan for the year ahead, by analyzing our strengths and opportunities for growth and leadership development.

For the past several years, the fall REC meeting has also included the presentation of leadership awards, recognizing members who have gone above and beyond to support their union. This year’s winners include: Janet Strahl (City of Portland), Faith Shuler (Washington State Department of Transportation), Lucas Smith (King County), and Stephanie Snitily (Chelan-Douglas Health District, pictured). Congrats to all of our winners, and thank you for all you do for our union! You can read more about Strahl’s great work welcoming new hires to PROTEC17 and helping new classifications join our union in this issue’s leadership spotlight on page 8.

The REC also awarded Portland member Mary Edin with a gold card, as she retires after decades of City employment, and after years of vital service to our union. Thank you Mary!

The meeting concluded with ‘good of the order’, where delegates are able to bring forward other items for discussion. For 2022 delegates, the next REC meeting will be held on Sat., Feb. 26, 2022 – details to come in the new year.

FacebookTwitterRedditLinkedInEmail
Previous
BACK TO ALL ARTICLES
Next
Deidre Girard2021-12-16T13:38:53-08:00
Go to Top