At midnight on April 28, the Washington State Legislature adjourned on time for the first time in a decade with an Operating Budget that fully funds PROTEC17’s 2019-2021 state employee contract. This means that the contract the bargaining team negotiated last year will be implemented on July 1, 2019, as planned, with the three percent cost-of-living adjustment (COLA) in each year, plus a myriad of other negotiated benefits.

“Geographic pay was a high priority for members on the survey we sent prior to the start of negotiations,” said Sarah Lorenzini, PROTEC17 Union Representative and Lead Negotiator.

“Currently, most people who work in King County cannot afford to live there,” she continued. “While we proposed geographic pay for other high-cost counties in the State, the emphasis was on King County during this round of negotiations given the astronomically high costs in that area. Now, all PROTEC17 state members whose duty stations are in King County will receive a five percent premium on top of their base salary.” 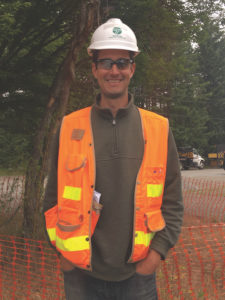 “We were also able to accomplish, after years of attempts, a $5,000 incentive for WSDOT members to obtain their Professional Engineer (PE) license,” said Lorenzini. “This is a step in the right direction in addressing staffing needs at WSDOT and ensuring members get the first opportunity to advance their careers at the agency if that’s what they chose to do. This will also help with WSDOT succession planning by ensuring the agency has enough employees with the proper licensure to get projects done and keep the public safe on the roads.”

Michael McIver, a Transportation Engineer 2 with WSDOT, plans to take advantage of the incentive next year. While he enjoys his current work, he acknowledges that without a license he can only move so far up in the engineering series. The new agreement provides an additional incentive for him to take the exam so he can potentially “keep moving up the food chain.”

Given the choice between working in Seattle and Olympia, McIver says he would choose Olympia because of the cheaper cost of living.

“It would be difficult not to justify moving into the private sector while living in a high-cost area like Seattle,” he said.

“While we didn’t get everything we wanted in this contract, we are proud that our team remained laser-focused on the priorities we heard from the surveys, fought hard for those who have been unjustly left behind, and gave ourselves the tools to stay strong in a post-Janus world,” said Lorenzini.

For full details on the new agreement, visit the webpage for your department at protec17.org/members.

FacebookTwitterLinkedInRedditEmail
Previous
BACK TO ALL ARTICLES
Next
Deidre Girard2019-06-18T14:26:29-07:00
Go to Top