Q&A with our new Union Organizers 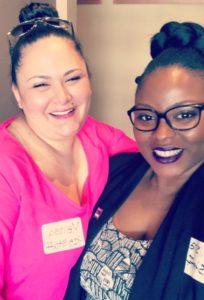 In October, PROTEC17 hired two new Union Organizers — Melissa Mafua and Alisha Gregory-Davis — who both come to us from SEIU 925 where they worked a combined 20 years.

Growing up in White Center, Wash., Mafua was taught that if you see an injustice happening and you don’t speak up, it’s as if you committed the injustice yourself. It was that core belief that lead her to become an active member in her first union (UFCW 21) at the age of 15. By age 24, Mafua joined the staff at UFCW, and a few years later, she joined SEIU 925 where she gained valuable experience with Public Sector unions and working in a Right-to-Work environment. All total, Mafua has 26 years of union experience.

Gregory-Davis, also a native of Washington state, brings over 19 years of public sector work experience and 10 years of union organizing experience to PROTEC17. As a former Wash. state employee, she understood the power of her union and how she could make a difference in the lives of her co-workers and the community by being an active member. Her union experience started as a member of her SEIU bargaining team, then she later served as an executive board member and member political organizer. Most recently at SEIU 925, Gregory-Davis worked as a staff political organizer, getting members involved in various political campaigns in Washington and throughout the country.

PROTEC17 is excited to have the energy and experience that Mafua and Gregory-Davis bring to our staff, and are excited about the work they plan to do to get members involved and to expand worker power in our union. We sat down with both of them to talk about their plans and why having an organized membership is important.

What exactly is a Union Organizer?
A Union Organizer is a person who has a strong emphasis on the importance of personal contact and relationship building. Organizers focus their efforts on helping union members act on their own behalf, rather than simply offering them services. This allows members to take ownership of their union by being a more active participants.

Why do we need Organizers?
PROTEC17 is operating in a new environment since the Janus decision by the U.S. Supreme Court made union membership in the public sector optional. In order to maintain the integrity of our contracts, our focus needs to shift to members taking on more active roles in their union, thus creating a sense of Union Pride throughout our bargaining units, chapters, and union-wide.

What projects have you been working on so far?
We have been working on revamping our new employee orientations, signing members up for whom we don’t have a membership card on file, identifying leaders throughout our union, and identifying areas for growth and involvement opportunities.

What makes a strong union?
A strong union membership lives by the motto “You hurt one of us, you hurt all of us!” It’s only when members truly understand that this is their union and that it will only work when everyone gets involved, that we become the strongest union we can possibly be. The strongest union is a union that has members that will stick by each other and fight for what’s right, no matter what.

How can members help strengthen our union?
Get involved in some capacity! You bring something special to the table that no one else can: YOU! Everyone has skills and experience to contribute — they just need to be plugged into their unique gifts. As organizers, we’re trained to recognize people’s gifts and help them harness their unique talents and strengths.