Seattle members sticker up for a strong contract!

On Dec. 7, thousands of union members at the City of Seattle wore stickers and used virtual backgrounds in support of the Coalition of City Unions (CCU) bargaining team as they headed into one of their last negotiations sessions of the year with the City for the next contract.

The sticker campaign – called #RSPCTforCityWorkers – aimed to highlight five priorities for union members at the City: Racial equity, Safety, Pay/affordability, Climate justice, and Time/work-life balance. This sticker day coincided with the discussion of several economic proposals on the table.

The PROTEC17 Seattle bargaining team was extremely pleased with the call to action, and felt the unity and solidarity going into negotiations. 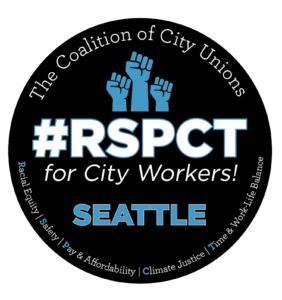 A huge part of the success of the campaign was due to the members of the Contract Action Team (CAT), which includes: Belinda Chin, Jamie Fackler, Alexis Izor, Chris Lee, Yun Pitre, Sundar Sharma, Lisa Uemoto, and Gretchen Waschke. These member leaders were the point people for sticker distribution and helped to send text reminders to members the day before the event.

“It’s been really exciting to engage and connect with colleagues around this contract campaign, learning about what members do and what they need to be successful,” said Jamie Fackler, PROTEC17 Steward and CAT member.

“Union members across the Coalition have been enthusiastic in advancing our cause and working towards shared goals that will improve our working conditions,” he continued.

While the current contract expires on Dec. 31, 2022, the terms of that contract will be upheld as negotiations continue into the new year. Please reach out to the bargaining team, a CAT member, or your Union Representative if you have questions about contract negotiations or need to update your contact information to receive future updates.

FacebookTwitterRedditLinkedInEmail
Previous
BACK TO ALL ARTICLES
Next
Jacky Nakamura2022-12-21T08:50:17-08:00
Go to Top