On Sat., Oct. 22, the PROTEC17 Regional Executive Commit-tee (REC), our union’s policy-making body, convened in-person for the first time in three years at the Seattle Labor Temple to conduct the business of our union and to celebrate member leaders. On the agenda was an exercise to inform the 2023-25 Strategic Plan, as well as honoring several members with leadership awards for their important contributions to building worker power.

The meeting opened with a welcome by PROTEC17 President Rachael Brooks and a tribal land acknowledgement from Kasi Marita Pereira, Director of Racial and Gender Justice at the Washington State Labor Council. It was announced that Brooks and Executive Board member Jennell Hicks were uncontested in their bid for another term. They will be sworn in at the next meeting. The REC then motioned to approve the minutes from the February meeting.

After hearing about new members who’ve recently joined our union, the body also approved the creation of two Chapters for members at two new PROTEC17- represented employers – the Port of Seattle and the King County Regional Homelessness Authority (KCRHA).

Delegates heard a ‘state-of-the-union’ update from Executive Director Karen Estevenin that emphasized our successes in 2022, including our burgeoning organizing program, many wins at the bargaining table, and progress in moving several racial justice initiatives forward. Delegates also heard a year-end budget review from Executive Board Secretary- Treasurer Jessica Garcia.

In an interactive exercise, delegates rotated around the room to answer and discuss seven questions that will be used by the 2023-25 Strategic Planning committee – along with survey results and member input from Chapter meetings, among other feedback – to shape our direction for the next three years (see more in article on previous page). 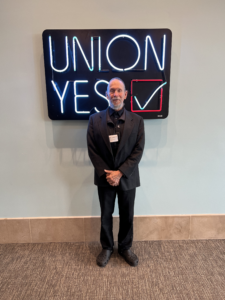 Gold Card recipient Jake Jacobovitch poses for a picture at the REC meeting at the Seattle Labor Temple.

For the past several years, the fall REC meeting has also included the presentation of awards that recognize members who have gone above and beyond to support our union and their coworkers. This year’s winners include Stewards of the Year Shomari Anderson and Jamie Fackler from the City of Seattle, and Organizer Extraordinaire Claire Guilmette (KCRHA).

In addition, several long-time PROTEC17 member leaders were honored with Gold Cards as they step into retirement, including Alma Gene Harris, a 40-year City of Seattle employee, and Jake Jacobovitch, a 37-year King County employee. An honorary Gold Card was also given to departing PROTEC17 Vice President Sean Simmons who has accepted a promotion out of the bargaining unit at WSDOT after serving for over 20 years on the Executive Board (see page 10 for full story).

Congrats to all of our winners, and thank you to all of the REC delegates for all you do for our union!

FacebookTwitterRedditLinkedInEmail
Previous
BACK TO ALL ARTICLES
Next
Jacky Nakamura2022-12-21T08:50:57-08:00
Go to Top