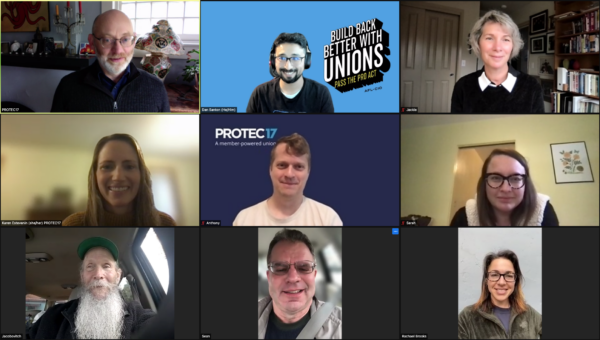 The PROTEC17 Constitution Committee is nearing the end of the their two-year project to update and modernize our union’s governing document. Tasked with the project in 2019, the Committee – comprised of volunteers from the PROTEC17 Executive Board, Regional Executive Committee (REC), and staff, pictured below – have thus far carefully combed through the constitution and have crafted six signifcant amendments that were ratified by a vote of the broader membership. The committee will present their final two amendments to the REC at their bi-annual meeting on Oct. 23, and, if approved, they will go to the full membership for a vote.

FacebookTwitterRedditLinkedInEmail
Previous
BACK TO ALL ARTICLES
Next
Deidre Girard2021-10-18T14:03:02-07:00
Go to Top