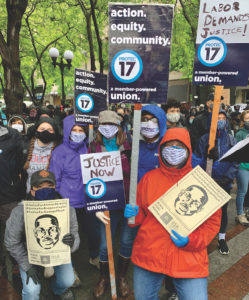 As one of PROTEC17’s newest member groups, the Senior Civil Rights Analysts in the Office of Labor Standards (OLS) at the City of Seattle are tackling some of today’s most pressing societal concerns – both on and off the job.

The OLS is responsible for enforcing the City’s labor laws and policies. They do this by investigating city businesses to ensure that they are in compliance with various ordinances, such as the minimum wage and paid sick leave. If businesses are found to be in violation, the OLS helps them get in compliance, as well as gets employees compensated for any violation of their rights. In its five year existence, the OLS has recouped $6 million dollars for workers in Seattle.

Sarah Leyrer, new PROTEC17 member and Senior Labor Standards Investigator (the working title for the Senior Civil Rights Analysts classification in OLS) has worked in the OLS since its formation. She came to the City of Seattle after working on wage theft issues in law school with the community group CASA Latina. She believes the OLS is an innovative approach to advancing workers rights, immigrant rights, and race and social justice issues.

Fellow Investigator and PROTEC17 member Sundar Sharma became interested in the intersection of race and social justice issues and public policy in high school when he got active in Barack Obama’s first presidential campaign. Since then, he’s worked on issues ranging from stopping South and Southeast Asian sweatshops, to pushing for the $15 minimum wage in Minneapolis, to campaigning against police violence. After attending graduate school for public policy, he started at the OLS three years ago.

Both Leyrer and Sharma were also integral in getting their colleagues organized into the union when the OLS became a division of the Office of Civil Rights, where PROTEC17 already had members in the Civil Rights Analyst classification.

“We felt like we wanted to join with our colleagues in PROTEC17 so that we could advance our shared interests through the union, win enhanced job protection, and organize more broadly with other city workers,” said Leyrer.

After voting to join PROTEC17 earlier this year, the new member group was certified in May 2020 by the Public Employment Relations Commission (PERC) – the oversight body that verifies union elections. Next, they will negotiate the terms of their contract.

“It feels like a great time to be part of a union,” said Sharma, who noted the timing of the pandemic and the extra economic security that comes with being a union when times are uncertain, as well as the swelling national movement for racial justice.

“It has been great to be able to organize as workers to fight alongside and as part of our respective communities for concrete changes in the City’s priorities around policing and austerity – both of which have disproportionate impacts on the communities of color that we serve as public sector workers,” Sharma said.

Leyrer and Sharma are very interested in advancing racial justice issues within PROTEC17 by ensuring that every strategy, policy, hiring, and negotiating decision that is made considers the impact to Black, Indigenous and People of Color (BIPOC) both within and outside of the union.

“I think we need to be thinking actively about how we can create unions that workers of color trust to stand up for them, both inside and outside of the workplace,” said Sharma. “This is part of how we can build a robust labor movement that has immense power to actively shape a future where race, gender, sexual orientation/identity, etc. doesn’t determine life outcomes.”

As part of the movement, Sharma and Leyrer have been actively participating alongside many PROTEC17 and other union members in the peaceful protests in Seattle, including the May 30 rally at Westlake Park and the June 12 silent march organized by Black Lives Matter Seattle-King County.

“This was the first time many of us had gathered in concrete organized action outside the office, which contributed to an overall mood that labor cannot sit on the sidelines during this enormously important upheaval,” said Sharma of his experience at these events.

“The pandemic is providing the opportunity to see our world and the systems we have built with fresh eyes,” said Leyrer. “I am glad to be part of an organization that I hope will choose to fight for radical, transformational justice.”

FacebookTwitterRedditLinkedInEmail
Previous
BACK TO ALL ARTICLES
Next
Deidre Girard2020-07-09T11:15:54-07:00
Go to Top