PROTEC17 endorsements for the May primary election in Oregon

Following interviews with 15 candidates for Portland City Council and Portland Mayor in late February and early March, PROTEC17 is announcing the following candidate endorsements for the May 19, 2020 primary, as well as supporting the renewal of the Fix Our Streets program.

Carmen Rubio has a long history working effectively within City Hall and showed a strong understanding of workers’ issues and a desire to address them. “Carmen Rubio is committed to increasing diversity in the City workforce and creating a culture of support and opportunities to advance, that’s important to me and I think its good for the City,” said PROTEC17 member Emily Wilson on behalf of the interview committee. Ms Rubio has identified addressing the housing crisis, increasing economic equity, reducing carbon pollution, and creating a more responsive City Council as her primary priorities. More information on her campaign can be found at www.carmenforportland.com

Julia DeGraw brings years of experience working in advocacy around environmental and economic justice issues. DeGraw was active in the fight against the attempt to strip the Water bureau away from the City in 2014, which could have jeopardized hundreds of City jobs if it had not been defeated. “Julia DeGraw’s environmental experience showed me she knows how to make tough decisions and get results.  As a self-proclaimed ‘system change’ candidate from east of 82nd her perspective will be valuable as we look at Charter Review,” said PROTEC17 member Emily Wilson on behalf of the interview committee. More information on DeGraw’s campaign can be found at https://julia4pdx.com

Commissioner Chloe Eudaly has served on Portland City Council since her election in 2016 as  the commissioner in charge of several bureaus with many PROTEC17 members including BDS and PBOT. “We’ve seen that Commissioner Eudaly is a quick study when it comes to the complexities of our City’s unique bureaucracy and how to best serve union workers,” said members of the PROTEC17 interview committee. “Of note, Eudaly is fully supportive of unionizing efforts of currently non represented City positions, such as the body of Program Coordinators in her assigned Bureaus. She will support PROTEC17 in its upcoming efforts to add union positions to its body of diverse union members,” they continued. Recently, Commissioner Eudaly has begun campaigning for the renewal of the Fixing Our Streets funding package for PBOT which supports the work of many of our members delivering necessary maintenance and safety improvement projects.

The PROTEC17 interview committee was made up of 7 members from across City bureaus who volunteered for this role, as well as well as two PROTEC17 staff members:

PROTEC17 Executive Director Karen Estevenin attended a portion of the interviews, and was able to directly communicate our union’s interest in the strength of Portland labor to candidates. “I was impressed the engagement of our members on the interview panel and their commitment to a robust process,” said Estevenin following the interviews. 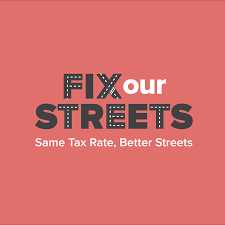 Additionally, PROTEC17 is supporting the renewal of the Fix Our Streets program. Fix Our Streets, first passed by voters in the fall of 2016, has provided important funding for safety and maintenance projects. The program is funded by a combination of a 10 cent per gallon fuel tax and a heavy vehicle usage fee. The heavy vehicle fee has already been renewed by City Council, and the gas tax component was referred to voters for renewal on the May ballot.

“Fix Our Streets has been an excellent example of a focused funding package providing concrete results for our community and meeting the promises made to voters,” said Elliot Levin, PROTEC17 Research Director who serves on the Fix Our Streets Oversight Committee. “PBOT has made wise decisions throughout the program in order to have a strong record of success when they returned for a renewal request,” he continued. Of the projects on the original Fixing Our Streets list created in 2016, all are on schedule for completion by the end of this year. Additionally, PBOT was able to provide additional enhancements to some of the projects as gas tax revenue exceeded the original $64 million in projections and the Bureau was able to leverage additional funding for some of the projects.The renewal proposal will fund an additional $75 million worth of safety and maintenance projects, including paving, traffic signals and crossing beacons, street lighting, and the Safe Routes to School program. Many of our members will work directly on these projects, and the Fix Our Streets renewal will provide a stable funding source for the next four years. While the COVID-19 pandemic has us all focused on staying on top of short term problems, it is important that we maintain this long term investment in our infrastructure. Fix Our Streets will be a critical ingredient to our city’s economic recovery.

For more information about the program, and its renewal proposal, please see: www.fixourstreetsportland.com

FacebookTwitterLinkedInRedditEmail
Previous
BACK TO ALL ARTICLES
Next
Deidre Girard2020-04-21T10:27:46-07:00
Go to Top