Life After Work (and During Coronavirus): Spokane member gets married online

On April 4, Ashley Eschette and her fiance Andrew Olmsted were married. But this was no ordinary wedding. Amidst the coronavirus pandemic, the Spokane couple decided to hold their wedding as a live event on Facebook for friends and family to attend while staying healthy and at-home during self-isolation.

Eschette, who has been an Engineering Technician II for Spokane County for the last five years, met her now-husband through friends while she was attending Evergreen State College in Olympia more than twelve years ago.

In March, as it became clear that the coronavirus was going to shut down events, including weddings and funerals, Eschette knew they were going to have to seriously alter their plans. When Gov. Inslee issued the stay-at-home order, they made the call to have what they dubbed a #viralwedding. 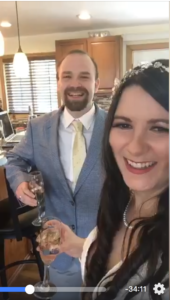 “It was important to us to still get married,” she said. “Fortunately, we already had the rings and marriage certificate, so we started brainstorming on what we could do to still include our friends and family in a safe way.”

First, Eschette reached out to three people – her close friend and officiant, Ashley Collins and her sister, Jessica Collins, who acted as a witness and live-stream videographer, plus their photographer, Jerome Pollos, who was a second witness – to see if they felt comfortable being in their home if safe social distancing was maintained. They said yes.

Next, she set up a private Facebook group, inviting family and friends to the big day, which was held at the same date and time as they had originally planned. She ordered some supplies online to decorate the mantel, and watched some tutorials to learn how to do her own wedding hair and makeup. And then, just before the big day, they cleaned and disinfected the house from top to bottom.

When the wedding day arrived, family and friends logged onto see the live-streaming event, watching Eschette and Olmsted exchange rings and vows, sharing online champagne toasts, and collectively dancing together. They even planned a virtual bouquet toss, and tossed her flowers towards the camera for viewers to “catch”.

Eschette said there were added bonuses to having a virtual wedding.

“We were able to invite so many more people than we initially had, plus friends and family members who couldn’t originally come now could,” she said.

“Also, people were able to comment in real time on the live stream, and after the big event was over we had a saved video with all of their sweet messages – like an interactive online guestbook.”

Their photographer even brought face masks for a memorable photo opportunity. “I have a feeling that those will be my favorite pictures from the day,” said Eschette.

When things return to normal after the coronavirus pandemic and it’s deemed safe to gather in large groups, the couple plans to have a big in-person celebration. Right now, their prioirity is for their family and friends to stay safe and healthy.

“The big celebration party and the honeymoon vacation are nice but they’re just bonus prizes,” said Olmsted. “The million dollar prize is getting married.”

Eschette gushed. “He is so sweet and I’m really lucky to be married to him.”

FacebookTwitterLinkedInRedditEmail
Previous
BACK TO ALL ARTICLES
Next
Deidre Girard2020-04-21T11:18:05-07:00
Go to Top