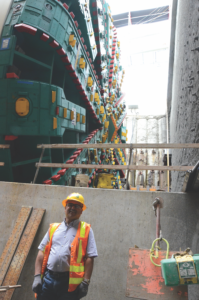 Washington State Department of Transportation (WSDOT) Chief Inspector Amjad Omar is one of the few State employees who had the privilege of seeing the State Route 99 (SR-99) tunnel project from start to finish. The work, which started in 2011, is mostly complete, with the tunnel opening to great fanfare in Seattle in February.

“We finally saw the light at the end of the tunnel,” Omar joked.

The tunnel itself is an engineering marvel. At two-miles long, it cuts under the city, runnning north-south from Queen Anne to the stadiums in the SODO neighborhood, bypassing surface street traffic. It replaces the Battery Street tunnel and the Alaskan Way Viaduct, which had both been deemed vulnerable to seizmic activity after the Nisqually earthquake in 2001. After years of political debate, the tunnel option was decided on in 2009.

Omar, who has been a WSDOT employee and PROTEC17 member for 31 years, worked with 12 of his fellow inspectors at WSDOT to oversee many aspects of the project, including making sure contractors were following the specifications outlined in the plan, and that all work was in compliance with State and Federal law.

The inspectors regularly tested materials and audited random components of the project to ensure that contract work was safe and to-code. They also worked with personnel at the Seattle Department of Transportation, Seattle Public Utilities, Seattle City Light, and King County to coordinate the vast amount of municipal infrastructure that needed to be accounted for in building the tunnel and demolishing the viaduct.

According to Omar, the reception since the tunnel has opened has been overwhelmingly positive. He said that recently, he and some colleagues were standing outside their office – which is located right at the southbound exit of the tunnel near the stadiums – when a driver coming out of the tunnel rolled down his window, gave them a thumbs up, and yelled ‘good job!’

“Everyone loves it,” said Omar.

Another one of Omar’s duties during the project was to give tours to other State employees and engineers from all over the world who came to see the massive tunnel boring machine affectionately nick-named Bertha (see cover photo of Omar with Bertha in the background). There was also an office on-site called “Milepost 31” where the public could get information about the tunnel and sign up to take a tour.

At the time of the digging, Bertha was the largest tunnel boring machine in the world. Omar is proud to have been a part of this unique project.

“This kind of project happens maybe once in a career,” he said. “It’s been so rewarding to see the fruits of our labor after working on this project from beginning to end.”

On February 2 and 3, WSDOT held a grand opening party, where the public could walk the two-mile tunnel before it opened to car traffic, and also walk on the viaduct before it was slated for demolition. The event included information booths, a fun run and bike ride, artists, food trucks and other family-friendly fun. Over a 100,000 people were in attendance.

Now that the celebration is over, the focus of the project has shifted to the demolition of the viaduct. Crews will work on three to five blocks at a time, using massive equipment, jackhammers, and specialized tools to slice through the concrete and rebar.

Omar and the other inspectors continue to oversee the viaduct demolition and the remaining finishing touches on the tunnel entrances and exits. The project is slated to be fully wrapped up by spring of 2020.

Funding for the $3.3 billion Viaduct- replacement project came from a variety of sources including state, federal and local sources, the Port of Seattle, and a new tolling system on drivers using the tunnel, which will start as early as summer 2019.

Once WSDOT is finished with their portion of the Viaduct, the City of Seattle will take over the rebuilding of the waterfront district. After this multi-year project, the waterfront is expected to look quite different, with more greenspace, bike and walking paths, improved surface streets, new businesses, and more. You can visit waterfrontseattle.org to learn more.

Some of Omar’s favorite things about working for WSDOT include the variety of interesting projects he gets to work on, and the opportunities for advancement. He started his career with the State as a non-permanent Transportation Technician 3 in Olympia in the late 80s, and has worked his way up through the ranks to a Transportation Engineer 3, the highest engineering classification represented by PROTEC17.

Omar also appreciates being a member of a union.

“Unions protect employees and are a resource to solve problems when they arise,” he said. “Not everyone can negotiate for themselves.”

While the tunnel project was an eight-year long endeavour, most of the other dozens of projects Omar has worked on over the years generally last a year or two. One of his other most memorable projects involved working on another engineering marvel – the Interstate 90 floating bridge rebuild in the 1990s.

Omar is proud of his long career at WSDOT and of all of the exciting work he’s had the opportunity to be involved in. When asked what’s next on the horizon, he says he’s looking forward to his final project – retirement – in about three years.

For more information on the SR-99 tunnel and viaduct project, visit: wsdot.wa.gov/Projects/Viaduct.

facebooktwitterlinkedinredditEmail
Previous
BACK TO ALL ARTICLES
Next
Deidre Girard2019-04-16T10:03:12-07:00