Whether we like it or not, politics plays a huge role in our lives. And especially as public employees, lawmakers at every level make decisions that impact whether your job will be funded, your retirement plan will remain solvent, or whether you can take time off to care for a sick loved one.

PROTEC17 advocates for laws and policies at the city, county and state level that support our members and their families. In addition, we have a political action committee (PAC) that makes endorsements for worker-friendly candidates. The PAC is funded through voluntary donations — NEVER DUES MONEY. 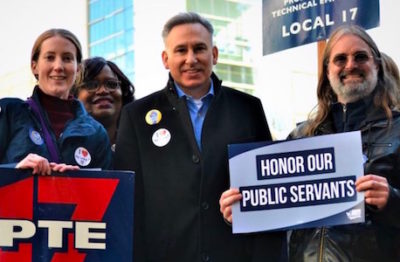 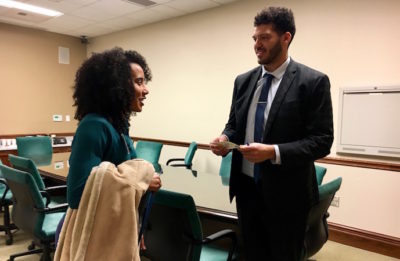 In Olympia, PROTEC17 has developed a reputation for results. We have co-sponsored bills that protect the personal information of public employees and expand assistance to the families of members killed on the job at WSDOT. We also advocate for funding for state employee contracts and Public Health programs, ensuring that you can continue to provide the quality, vital services that our communities expect and deserve.

At the local level, PROTEC17 works with city and county governments to pass policies that support our membership. Recent wins include: paid parental leave at King County, expanded birth control and fertility treatment coverage at the City of Seattle, and getting time in new employee orientations to learn about your union rights, which has been granted by all of our employers.

Learn about voter eligibility requirements, important election dates and deadlines, and get registered on the Washington Secretary of State website. 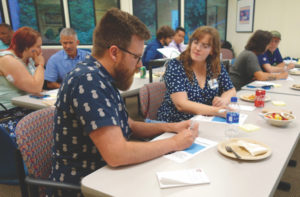 On Aug. 29, PROTEC17 held a pilot training for members as part of a complete revamping of our political program and political action committee (PAC). The training was held at the PROTEC17 office from 5-8 p.m. with over a dozen members from King County and the City of Seattle in attendance.

The pilot program is helping members connect the dots between who we elect and how it can inform public policy and impact jobs and contracts – especially in the public sector. Part of the PROTEC17 curriculum is also teaching members to be effective advocates with their local, state and national representatives.

Another aspect of the new PAC invited members to take part in PROTEC17 candidate endorsement interviews. These thave been taking place throughout the summer and fall, including a full morning of interviews on Oct. 5 at the PROTEC17 office. Ten members volunteered their Saturday morning to interview four candidates for City and County government. Candidates are evaluated on their stance on issues related to workers, public sector jobs and funding, and other topics that directly impact our members.

Many members are already politically active, and were excited to see PROTEC17 take a more active role in engaging members in politics. 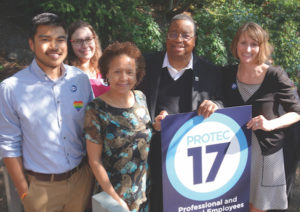 The 2019 political season is nearly in full swing. In preparation, and with the input of members, PROTEC17 spent the summer rethinking our political program and has started to roll out some big changes.

This year, members have gotten more involved in the endorsement process across Washington state. From the Seattle City Council races to the Spokane mayoral race, members have stepped up to ask the tough questions to ensure that their representatives have the best interest of workers at heart.

Another part of our new political program is a pilot training that is being held on Aug. 29. In this training, members will learn how to define the impact of politics at work and beyond, develop strategies to encourage co-workers to become politically active, and identify activities on all ends of the engagement process that build union power. There will be other opportunities to participate in the near future if you weren’t able to sign up for this one.

PROTEC17 is expanding its political reach in Oregon, too. We have a legislative advocate who keeps track of important bills in Salem that may have an impact on our members at the City of Portland — like changes to the retirement plan, for example.

Meanwhile, in Portland, we continue to build strong connections with City leaders, like the Mayor and City Commissioners, and work together to find solutions to issues that affect members and their families. One of our biggest wins is the change to the vacation accrual rates for City employees. By working with City government, not only do our members get more vacation time and better work-life balance, but the City will improve their recruitment and retention rates, while fostering happier, healthier and more productive employees.

Head to www.oregonvotes.gov to make sure you’re ready to vote!

Following interviews with 15 candidates for Portland City Council and Portland Mayor, PROTEC17 is announcing the following endorsements for the May 2020 primary:

Carmen Rubio has a long history working effectively within City Hall and showed a strong understanding of workers’ issues and a desire to address them. “Carmen Rubio is committed to increasing diversity in the City workforce and creating a culture of support and opportunities to advance, that’s important to me and I think its good for the City,” said PROTEC17 member Emily Wilson on behalf of the interview committee. Ms Rubio has identified addressing the housing crisis, increasing economic equity, reducing carbon pollution, and creating a more responsive City Council as her primary priorities. More information on her campaign can be found at www.carmenforportland.com

Julia DeGraw brings years of experience working in advocacy around environmental and economic justice issues. DeGraw was active in the fight against the attempt to strip the Water bureau away from the City in 2014, which could have jeopardized hundreds of City jobs if it had not been defeated. “Julia DeGraw’s environmental experience showed me she knows how to make tough decisions and get results.  As a self-proclaimed ‘system change’ candidate from east of 82nd her perspective will be valuable as we look at Charter Review,” said PROTEC17 member Emily Wilson on behalf of the interview committee. More information on DeGraw’s campaign can be found at https://julia4pdx.com

Commissioner Chloe Eudaly has served on Portland City Council since her election in 2016 as  the commissioner in charge of several bureaus with many PROTEC17 members including BDS and PBOT. We have had a good working relationship with Commissioner Eudaly and her staff during her first term and have appreciated her support for our members in her bureaus. Recently, Commissioner Eudaly has begun campaigning for the renewal of the Fixing Our Streets funding package for PBOT which supports the work of many of our members delivering necessary maintenance and safety improvement projects.

The PROTEC17 interview committee was made up of 7 members from across City bureaus who volunteered for this role, as well as well as two PROTEC17 staff members:

As the retirement cuts contained in the controversial Senate Bill (SB 1049)that passed in the Oregon legislature this spring begin to roll out, there will be significant discussions about how they will impact public employers and employees across the state.

PROTEC17 and other unions at the City of Portland will be entering into negotiations with the City shortly to discuss the ramifications of changes to the Public Employees Retirement System (PERS) that are set to begin in July of 2020. Specifically, we will be addressing the Individual Account Program (IAP) redirect, which will be 2.5% for PERS 1 and 2 members, and 0.75% for Oregon Public Service Retirement Plan (OPSRP) members. We are focused on protecting as much of this benefit as we can for our members in order to both ensure retirement security and to keep the City of Portland an attractive place to work at all stages of a professional career.

Concurrently, there will be legal challenges to SB 1049, and PROTEC17 is working with the Oregon PERS Coalition as it explores these options. Legal action will likely be taking place in the coming months and arrive at the Oregon Supreme Court in the coming biennium.

Finally, while SB 1049 represented the biggest PERS cut in years, opponents of public employees will continue to attempt to strip members of remaining benefits, as seen in the initial filings of four initiative petitions for the 2020 ballot. These petitions seek to establish a 401k style defined contribution PERS tier, require direct employee contributions to the IAP or similar account, and further reduce the final average salary limit for benefits. PROTEC17 will track these initiatives closely through our work with the PERS Coalition, and we will notify members on ways that they can fight back against retirement cuts.